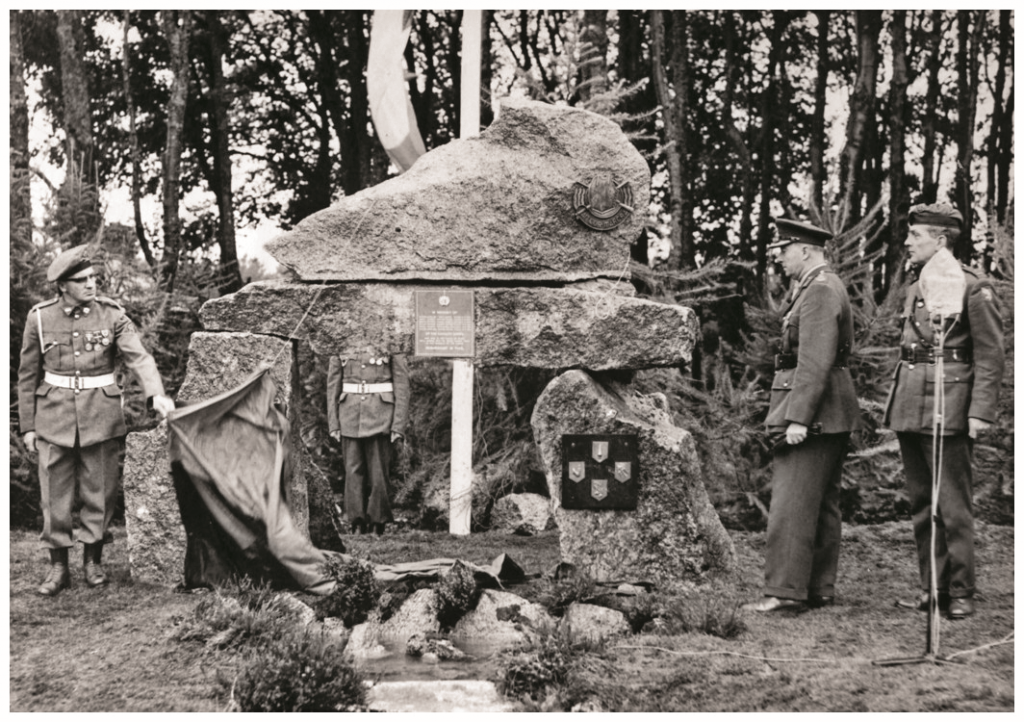 The memorial garden at Plunkett Bks, Curragh Camp, to honour cavalry personnel who lost their lives under the flag of the United Nations, was opened on Sunday 6th October 1963 when the central monument was unveiled by Chief of Staff Lt Gen Seán McKeown.
Construction of the garden was carried out after normal duty hours under the direction of Comdt Joe Foley and Capt Tommy Roche and was undertaken by volunteers from the units in the barracks. As worked progressed, Mr George Spiers, a landscape designer of Spiers Nurseries, Burtstown, Athy, was engaged. 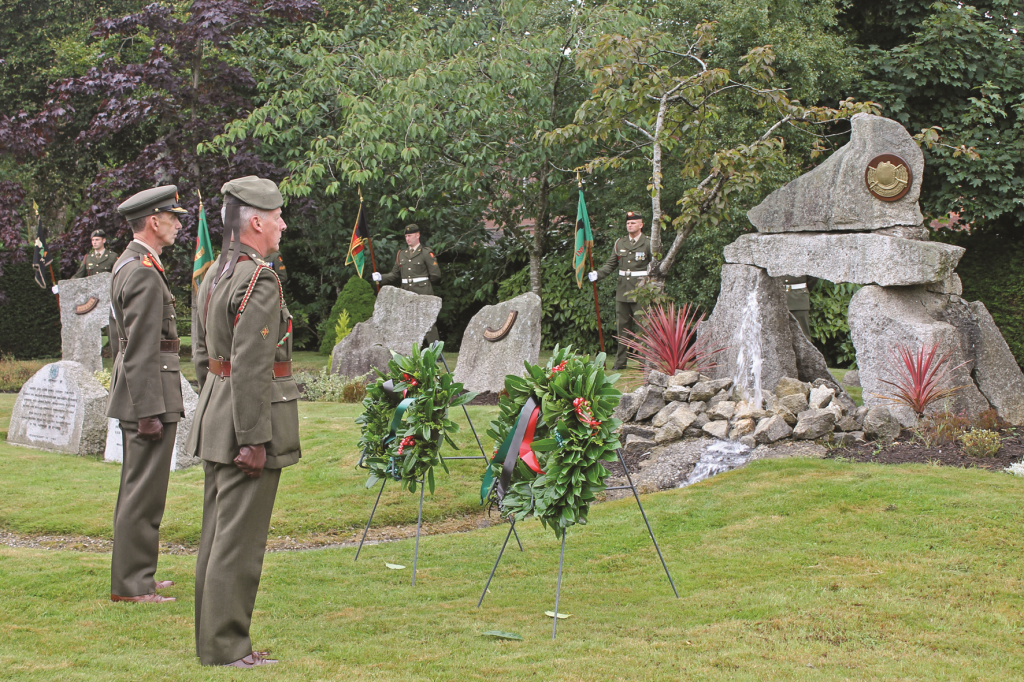 The cromlech design of the memorial is based on the megalithic monuments at Moytura Conga in County Mayo, where, according to mythology, a great battle took place between the Fir Bolg and the Tuatha Dé Danann three thousand years ago, and the capstone is shaped like a cavalryman’s Glengarry.
The inscription on the gate into the garden reads “In omnem terram exivit sonus eorum”, a motto given to the Irish troops in the Spanish army by Phillip V of Spain in the sixteenth century which means “Their fame has gone throughout the world”.
During his address at the unveiling ceremony, Lt Gen McKeown said: 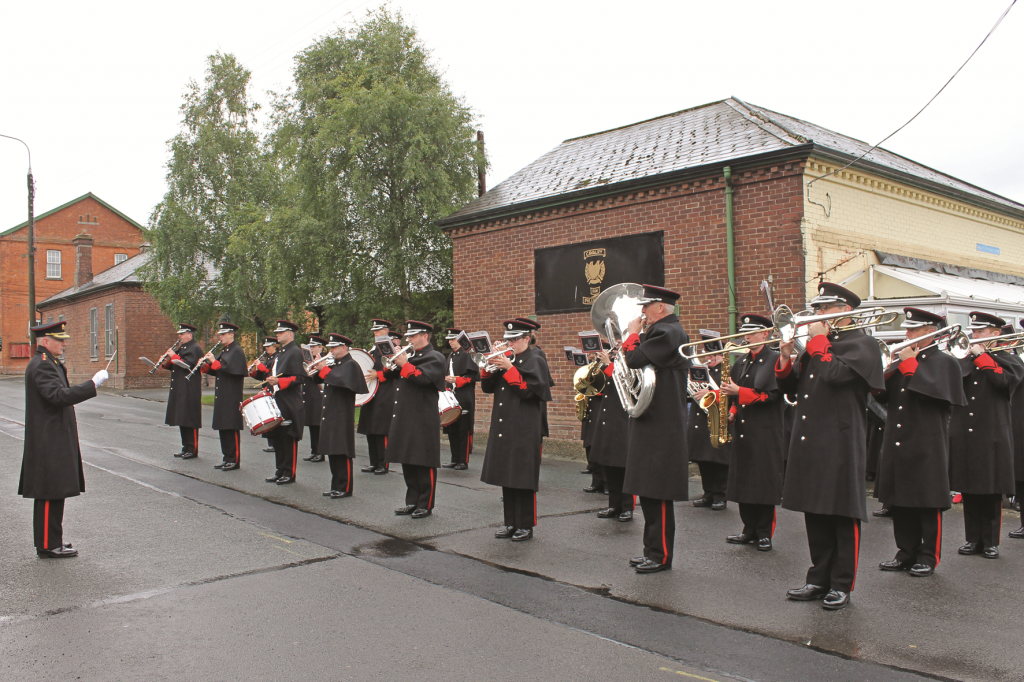 The memorial was funded by voluntary subscriptions from personnel in cavalry regular and reserve units, Cavalry Workshops and Technical Stores and individuals, along with grants from Plunkett Officers’ Mess, the Cavalry Club and the 11th Cavalry Association. The initial cost for materials, lighting, shrubs and plaques amounted to £1,851-8s-6d. 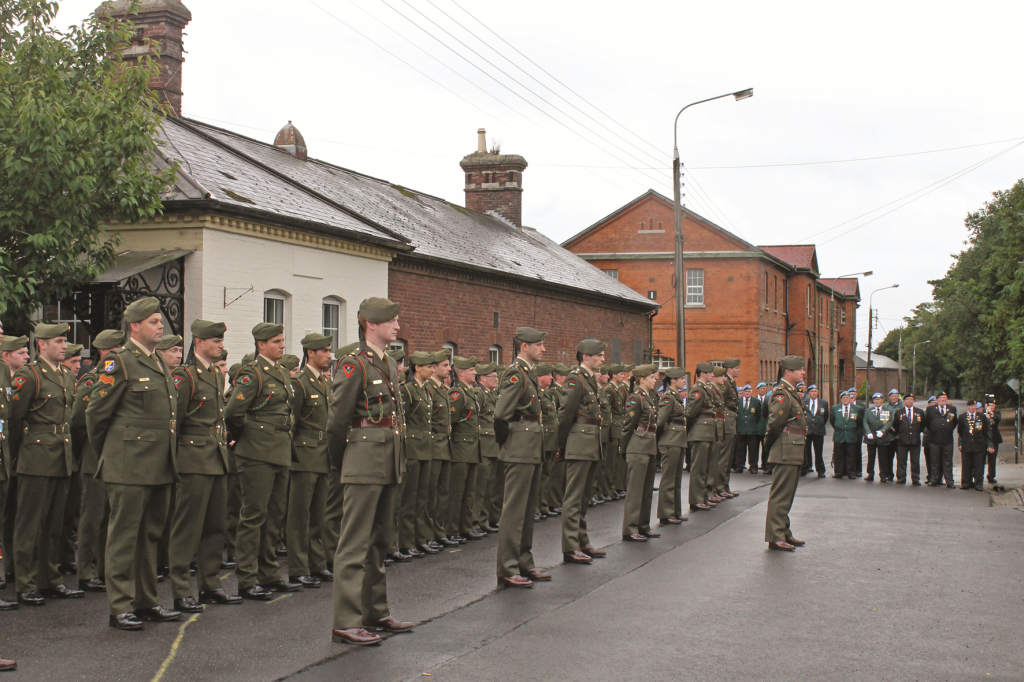 On Saturday November 5th 1966 the inaugural Remembrance Day for cavalry personnel killed while serving with the United Nations in the Congo and Cyprus took place and since then it has been held on the first Saturday in September.
In recent years the Cavalry Club has provided funds for the maintenance of the memorial. The Club’s Rule 2.4 is:

“To provide for, and when deemed necessary to expend funds on, the maintenance of the Cavalry Corps Memorial Garden in Plunkett Barracks, Curragh Camp, Co Kildare.”