As published in An Cosantóir in February 2017
Photos: Christy Fleming & www.unmultimedia.org

The source of information for the following article is an unsigned contemporary report on the activities of 1 Inf Gp in the Congo in 1961, written towards the end of the deployment. 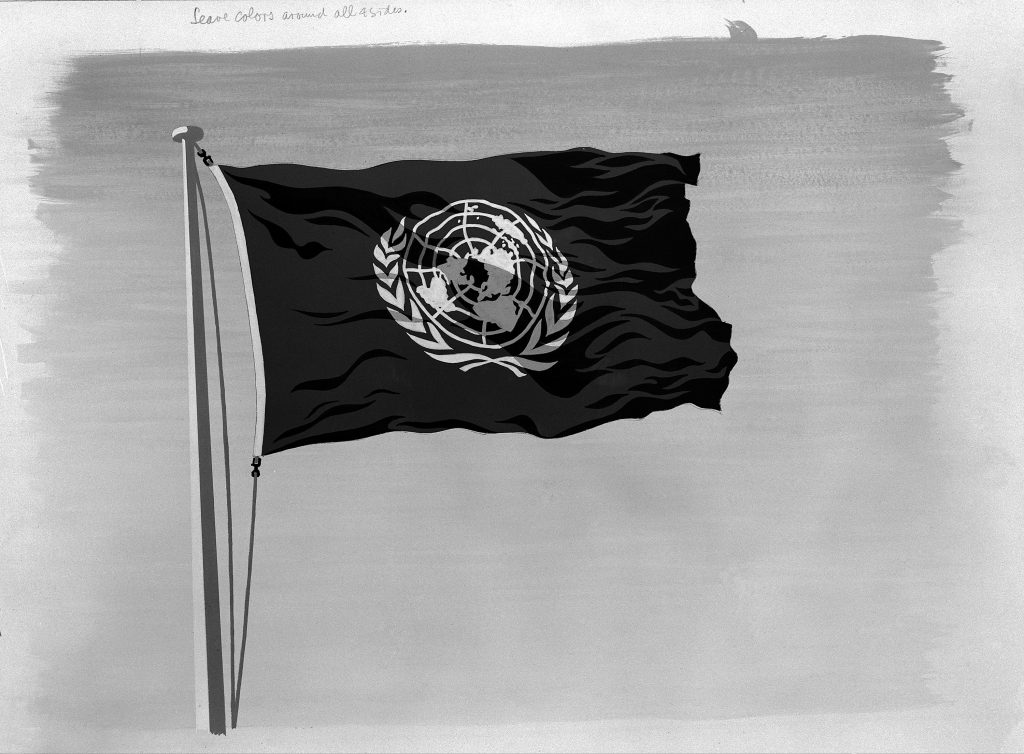 1 Inf Gp, or ‘One-Inch Group’ as it was affectionately called by its members, was formed in April 1961 for service with the UN in the Congo. Comprising a company from Eastern Command and one from Southern Command, with a tactical HQ, it was the first Irish formation to be armed entirely with the new FN rifle and the Carl Gustav 84mm recoilless rifle and was designed to be a hard-hitting, highly-powered, independent, self-contained unit.

Shortly before leaving Ireland it was announced they would be heading to Kasai province, where, a few days earlier, tribal warfare had broken out in the area of Mwene-ditu, where the HQ was to be based.

The unit flew out on 25th and 26th May and when they arrived in Mwene-ditu they started taking over from the Ghanaians. However, as a virulent small-pox epidemic was raging in the territory, the senior UN MO ordered that anyone who had not been vaccinated within the previous three months would have to be revaccinated before going into the area. (Throughout their deployment small-pox and other diseases were so rampant that the whole of south Kasai was known as a pathologist’s paradise.) 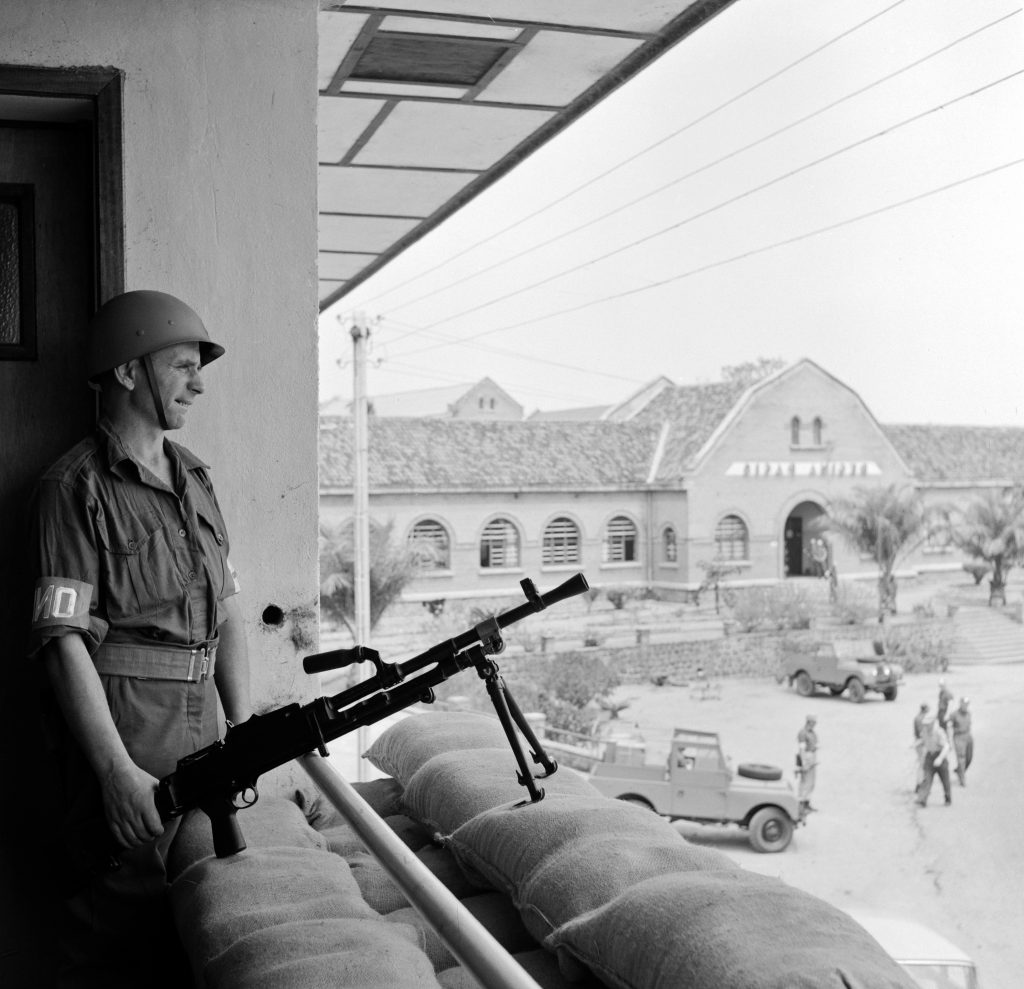 Due to the revaccination delay it wasn’t until 17th June that the Group had taken over the entire south Kasai sector, with an area of 6,000 sq miles to look after.

1 Inf Gp was responsible for guarding over 60 miles of important railway line that provided the main supply line from Elisabethville through Katanga and Kasai to Port Franqui.

At least three times a week the unit provided train guards to protect hundreds of refugees travelling on the line, which ran along the borders of Baluba and Kanioka territories, and also between Lulua and Baluba tribes, who were traditional enemies. Any relaxation of vigilance could mean a flare-up of the tribal wars that had unhappily caused so many UN casualties a short time previously.

1 Inf Gp held the area for over two months, eventually occupying posts previously occupied by a battalion with a recce squadron in support.

The unit’s posts were barbed-wire enclosures about the size of a football pitch, which they never left except to patrol in strength, living in primitive conditions under canvas and with a constant shortage of water; one post had to travel over five miles to collect their water in jerry cans.

The Ghanaians had taken their transport with them and the Irish had to wait a considerable time for the arrival of UN replacements. In the meantime, the transport for one company, with two posts over seven miles apart, consisted of one jeep, two pick-ups and a bullet-riddled, five-ton truck. Roads were rutted tracks and after a few miles faces and clothes were covered with a thick coating of black-red dust. Loaded weapons were carried by all personnel at all times. Snakes were also plentiful; at one post four deadly mambas were killed in one day alone. 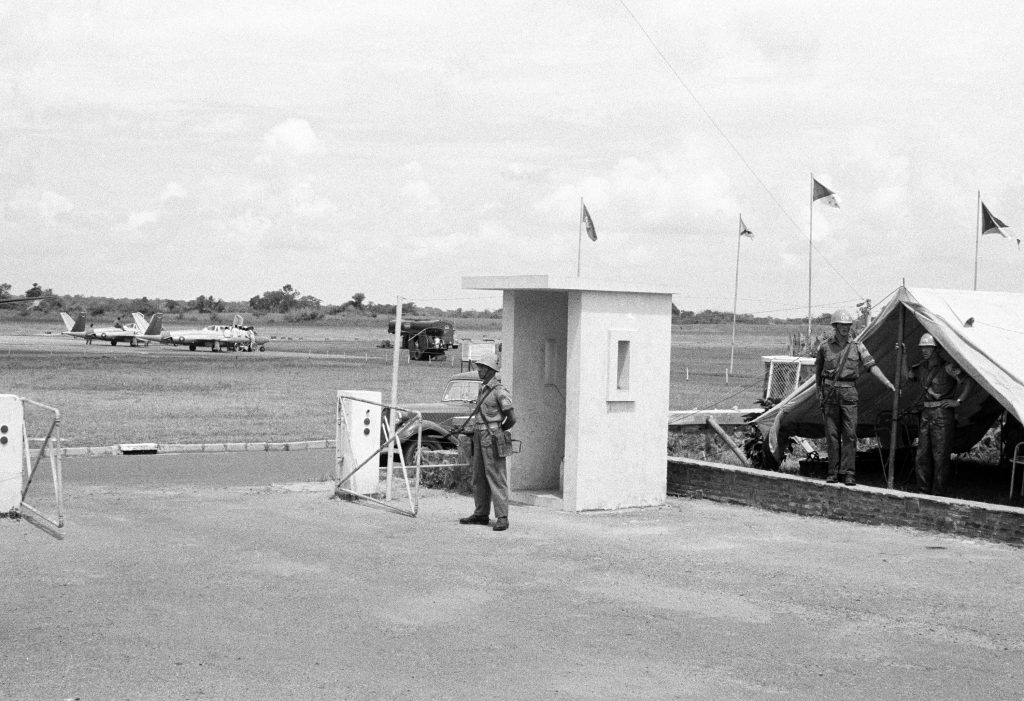 By the time 1 Inf Gp was withdrawn to Kamina, south Kasai was considered a ‘safe area’ due to their efforts, and the UN garrison there was not replaced. When the last company was leaving Mwene-Ditu, the Minister of the Interior came to the railway station to address the Irish, telling them that they were welcome back to south Kasai at any time. At each station on their route deputations met the train and similar speeches were made. It was a testament to the Irish soldiers’ efforts, given that two months before there had been a shooting war between local troops and UN personnel.
On arrival in Kamina after four days travelling in dilapidated railway coaches, OC 1 Inf Gp took over as base commander and as commander of the NW sector of Katanga, an area over 100 sq miles previously occupied by a Nigerian brigade, and which included 100 Swedish troops. In addition to running the huge base and its outposts 1 Inf Gp also had to garrison Kilubi, 60 miles away, where a hydro-electric station supplied power to Kamina.

With such a huge area there wasn’t much time for rest but living conditions were excellent and the work was much easier. Strength on the base, including the Swedes, was roughly 300. 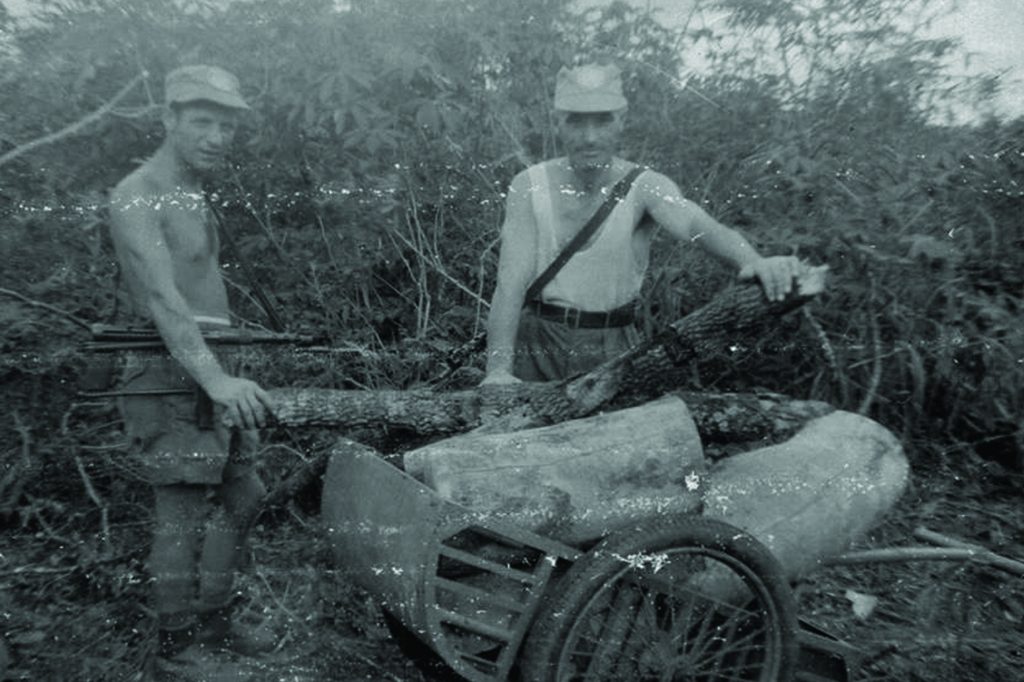 Then, on August 27th 1 Inf Gp was handed two Katangan officers to guard; one a French mercenary. The next day, captured mercenaries started to roll in from the rest of Katanga and in a short time they had 150 under guard, along with 27 others they had rounded up in their own area. These mercenaries were tough and unpredictable; a roving army of ‘guns for hire’ who had fought in Korea, Indo-China, Palestine, Europe, and Cuba.
From 2nd September the Irish unit also had to send a nightly patrol of 50 into Kaminaville, 30km away.

Along with all the extra duties and extra guards, the situation meant that trouble was almost inevitable. It duly arrived.

On the night of September 12th ‘stand-to’ was ordered. There were 14 roads and a railway line leading into the base and it had been acknowledged that it would require a brigade to successfully defend Kamina, a town whose importance was recognised in the saying “who holds Kamina holds Katanga”. With small numbers, the best Lt Col O’Donovan could do was to man strategic strong points around the base and scramble the mobile reserve. 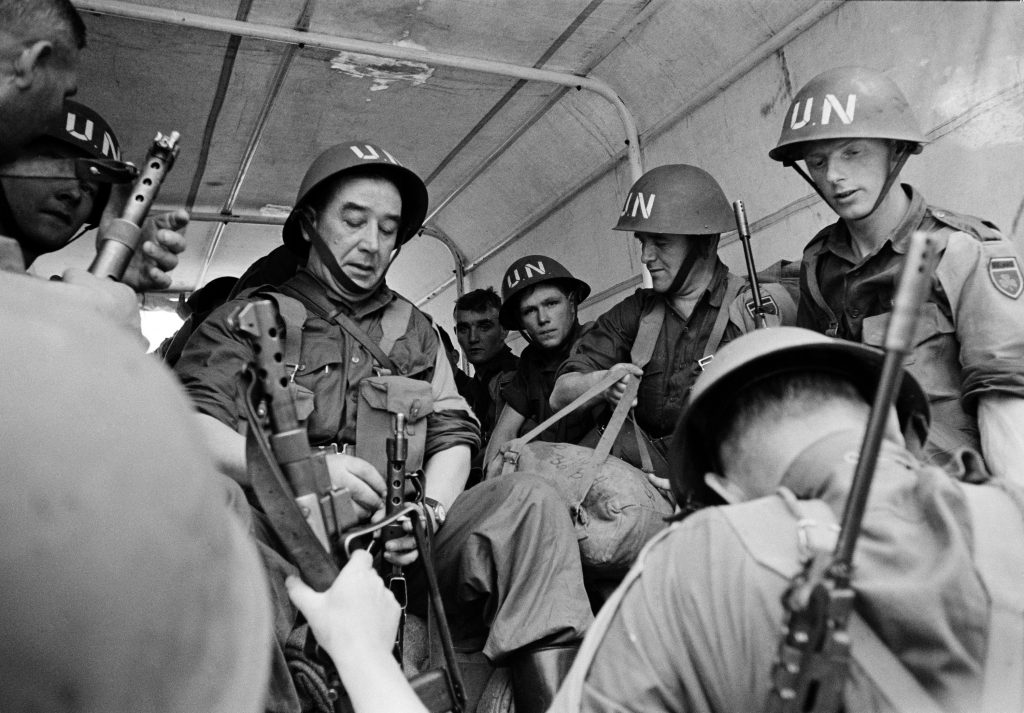 Reports coming in of enemy strength were of 1,200 troops, equipped with long-range mortars, and eight Saracens armed with 57mm cannons, twin machine-guns, and .5” machine guns; completely out-gunning the Irish unit. The enemy also had a reserve of 2,500 troops in the Kaminaville sector and it was claimed that they could arm 20,000 tribesmen.
On the afternoon of September 14th they attacked. The first wave came up against a strong point manned by 29 Swedes with an Irish mortar section in support. This attack was broken up and the 84mm knocked out two Saracens. Irish mortar fire also blew up an enemy ammunition truck containing about five tons of mortar rounds and small-arms ammunition. Lt Col O’Donovan quickly deployed his mobile reserve and further attacks were broken up as they arose. Probing tactics, sniping and mortar fire continued from the edge of the jungle, but men and weapons were quickly moved to counter threats and in all cases the enemy were beaten off.

Late on the evening of the 15th around 30 enemy infiltrated houses on the outskirts of the base where the jungle grew right up to the perimeter. At first light on the following morning an Irish platoon counter-attacked and after a fight lasting about three hours dislodged the enemy who left three dead behind.

When the base came under long-range mortar attack, Irish mortar crews crept forward under fire and brought down deadly fire on the enemy positions. The Irish crews kept changing their positions and continued striking enemy positions while their opponents seemed to be unable to shift their fire quickly in response. 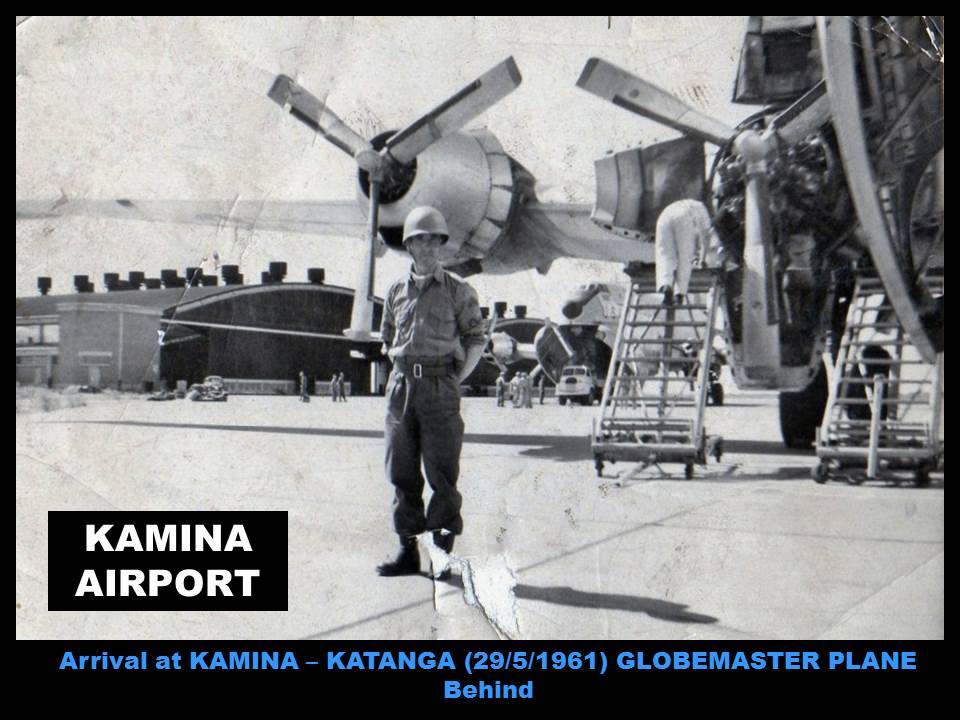 The enemy never set foot on the base again and it was the nearest they came to the airport five miles away. Enemy dead during these actions was estimated at 35 killed and 48 seriously wounded.

The defenders were also subjected to regular air attacks from Fouga jets and all roads and bridges into the base had been blown up. Gradually, however, their meagre force was reinforced by air at night. As each new unit came in they took over positions from the Irish troops who moved further and further out in search of the enemy. While they came up against some sniping and mortar fire they no longer faced serious opposition.

On the night of the 19th 55 men of B Coy in Kilubi, who had been cut off when the enemy blocked and mined the road, were evacuated by helicopters. The rearguard of one officer and seven men destroyed all stores and equipment before taking off. The garrison was no longer needed in Kilubi as the power line had been cut.

1 Inf Gp used its generators for power and to supply emergency lighting for the airport’s runways and power for the control tower.

On receiving information that enemy reinforcements were moving in, 50 Irish troops were sent out to ambush them. Positions were chosen, prepared and manned, but the enemy didn’t materialise. Another 50 Irish were sent out to guard against a possible attack from the Jadotville/Kolwezi road.

By the time a ceasefire came on the night of 20th September the base was manned by 320 Irish, about 300 Swedes, and about 100 Indians, all under the command of Lt Col O’Donovan. 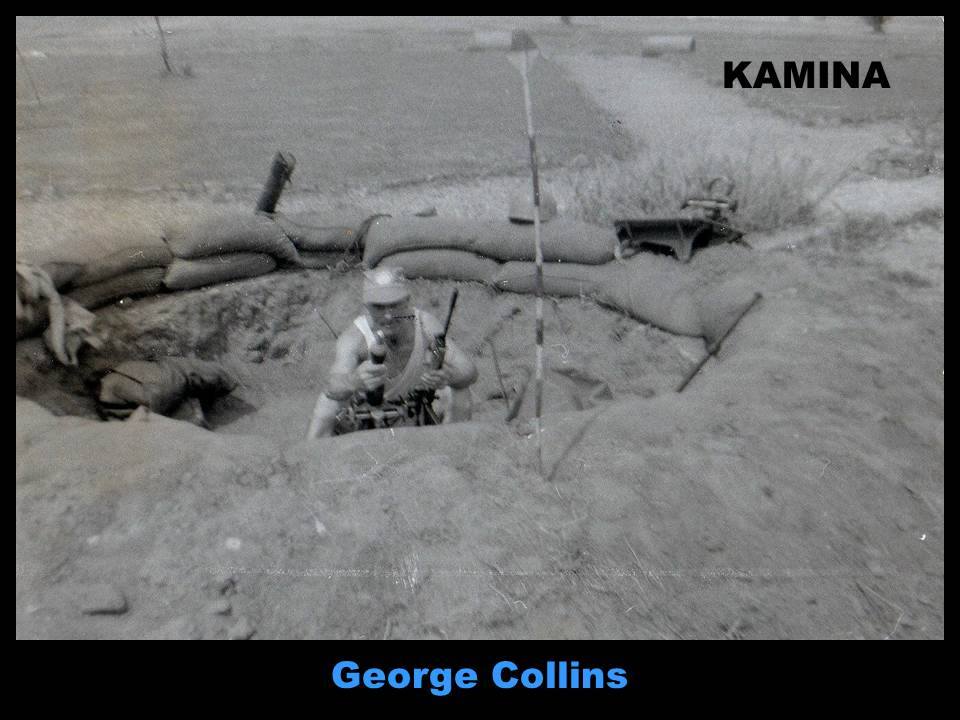 Not only had they secured the base but had advanced out and were holding all the ground up to the jungle’s edge.

Despite the air attacks and the vastly superior range of their opponents’ weapons (until some long-range mortars were captured and turned on the enemy), the only casualties suffered on the base were three Congolese civilian refugees killed and an Italian pilot wounded in the first Fouga attack, and two civilian pilots wounded in a later attack when their plane was bombed on the ground.
After the ceasefire the troops still had to man the outer defences and hold the ground they had won. There was little rest, with 24 hours on, 24 off. Then on 9th October 1 Inf Gp received 24 hours’ notice to pack-up and move to Nyunzu near Niemba.

The Swedish company from Kamina also moved to Nyunzu, still under the command of 1 Inf Gp.

Taking over from the Ghanaians, they were the first white troops to occupy the area. Back into the bush and into tents, but this time at the height of the rainy season. They were also back among the Balubas and carried out frequent patrols to Niemba, and sad pilgrimages to the scene of the ambush.

In Nyunzu they had 144 Katangan prisoners to look after, in addition to guarding the town, a railway, the road network and an airstrip. 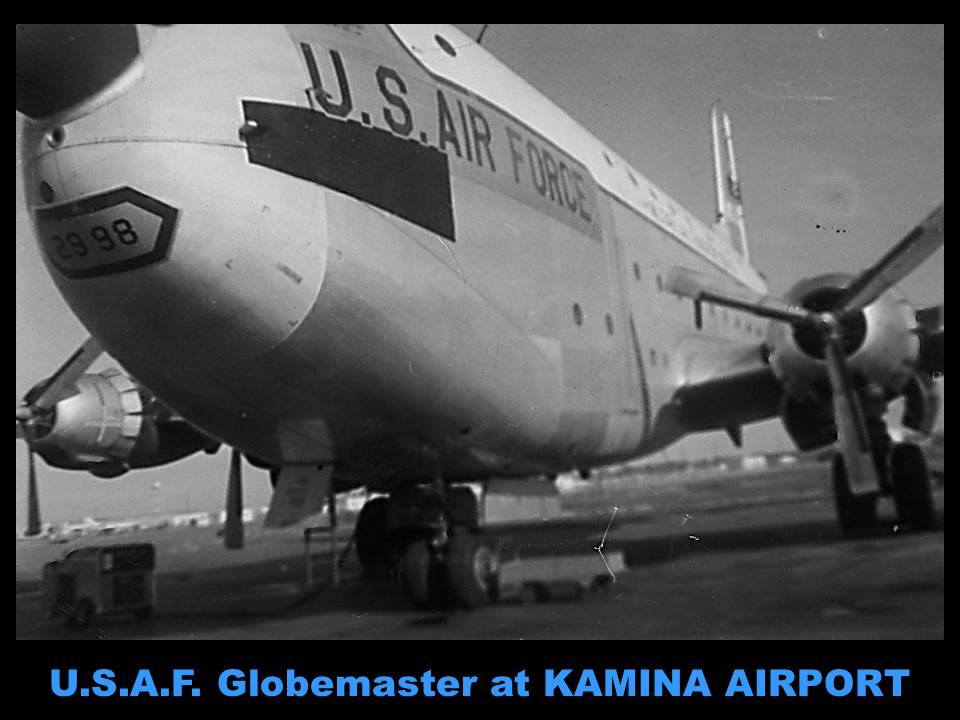 By the time the report on which this article is based was written, 1 Inf Gp had occupied seven stations since their arrival in the Congo five months previously, operating for all bar two weeks at ‘battle stations’. The writer of the report said that morale, which had been very high when things were toughest, was dropping steadily with the arrival of each batch of newspapers from Ireland as the troops found that the Irish public were not being informed of their activities. Far from being a nebulous outpost of 35 Inf Bn in Elizabethville, as portrayed in the papers, Kamina was over 200 miles away and was an independent command.

While giving all credit to 35 Inf Bn for the magnificent job they did in Elizabethville, the men of ‘One-Inch’ Group felt they also deserved credit for the work they had done and the hardships they had endured in the Congo; spending their entire service stationed near small towns without shops or modern amenities, confined to their camps because all their deployments were in trouble spots. Credit they certainly deserved in light of the above story.

One thought on “‘One-Inch Group’ in the Congo”