It’s fair to say most serving soldiers don’t know much about veterans affairs or care for them until one day they become a veteran themselves.

On the 23rd September over 100 delegates from around Ireland met to discuss veterans affairs for the Organisation of National Ex-Service Personnel or ONE in the Radisson Blu Hotel, Limerick. The opening addresses were given by ONE Chairman Paddy Rooney and 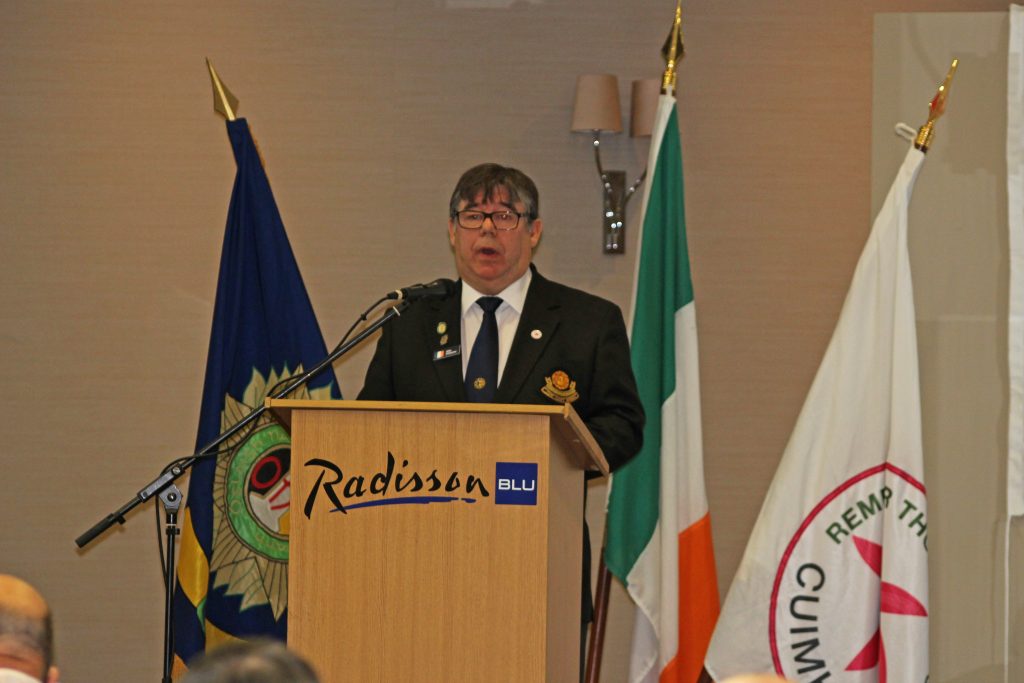 ONE CEO Ollie O’Connor and new to the board was recently retired Brig Gen Colm Campbell, who stated the reason veterans join the ONE, “Comradeship. We have shared experiences and a shared past. That’s why we get on so well. We value the esprit de corps of comradeship!”

Gen Campbell went on to discuss the strategic plan of the ONE: “We have to accept, we won’t always get it right, but we must work at it. We have to be able to change the plan.” 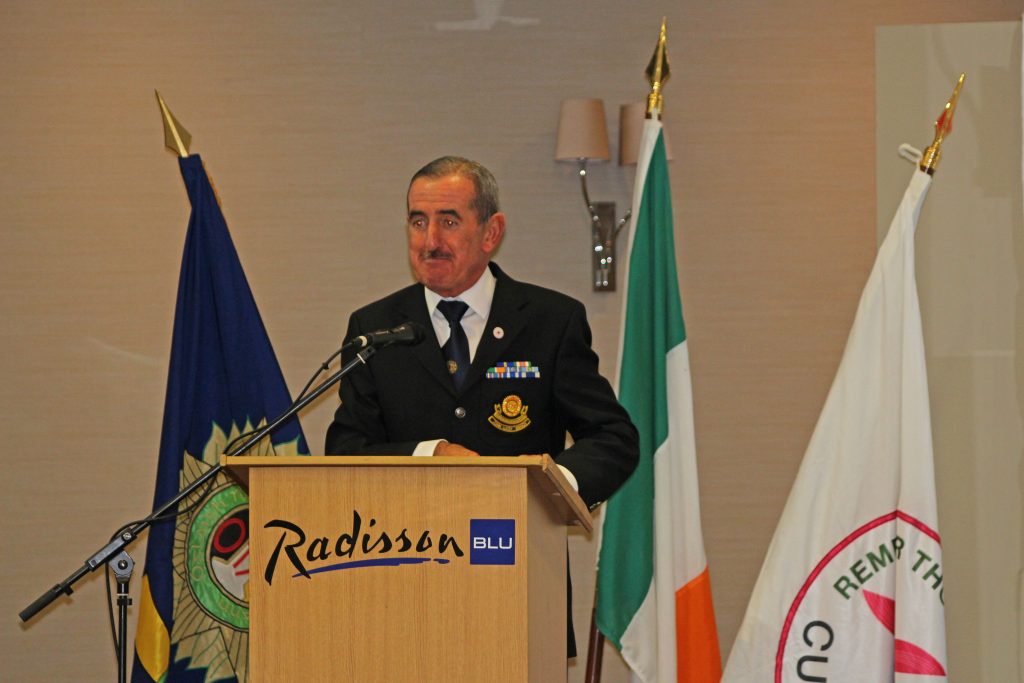 “The veterans policy in the government’s latest white paper is positive and it’s good that its there – but it’s not enough and needs to be developed DoD and ourselves, along with IUNVA and ARCO,” said the retired general.

Speaking about membership, General Campbell said there are an estimated 100,000 veterans out there, and the ONE needs to recruit more members: “Not of senior ranks,” he said, “but the influencers. The guy on the back gate who knows everyone. Veterans are much stronger together.”

The general took questions from the floor, most referred to the local branches on the ground accessing ONE Fuchsia funds to help veterans that need assistance. The general explained that retired members of the Defence Forces can get support from the Defence Forces Benevolent Fund as that is its purpose to aid veterans. 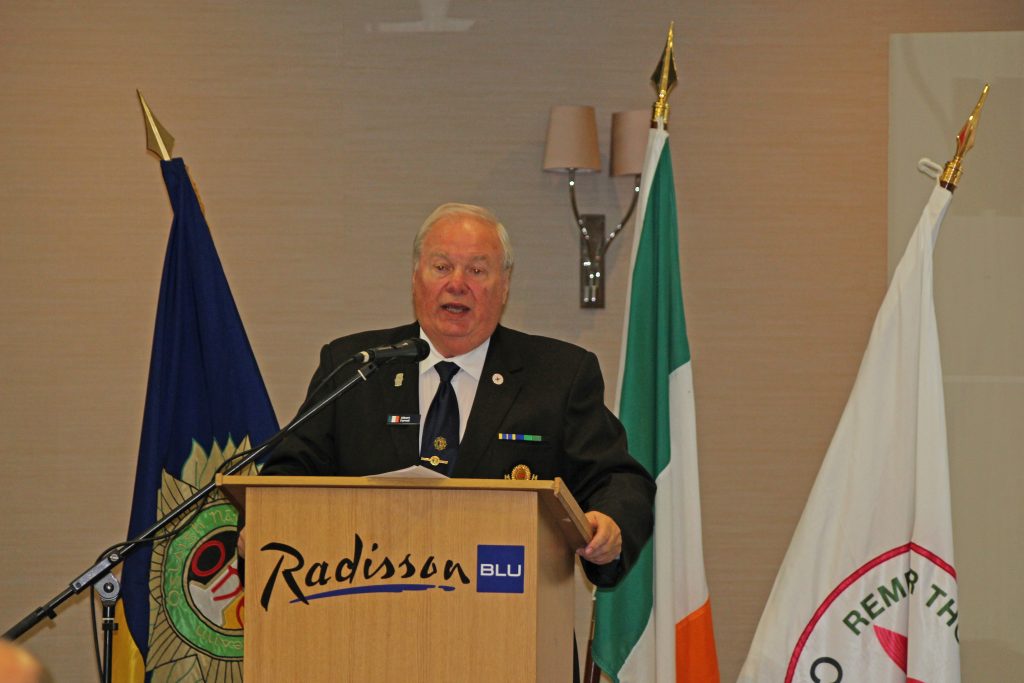 Next to the podium was Albert Farrell, ONE’s Company Secretary, who spoke about corporate governance and the ONE’s main objective which is to fund the homeless initiative. He briefed members on the last annual audit by Dublin City Council, saying they “passed with flying colours”.  He said the ONE was to be commended on only 45% of monies collected going on wages, which compared to Focus Ireland and the Peter McVerry Trust who spend 75% and 73% respectively on theirs. The average ONE wage is €23,000.

Albert said that Revenue and the Charity’s Regulator were both happy with the new branch banking system. During a Q&A session, he advised branches to look at their costing for their annual mass and parade as they were costing too much to run, “Maybe branches could do joint masses?” he said. 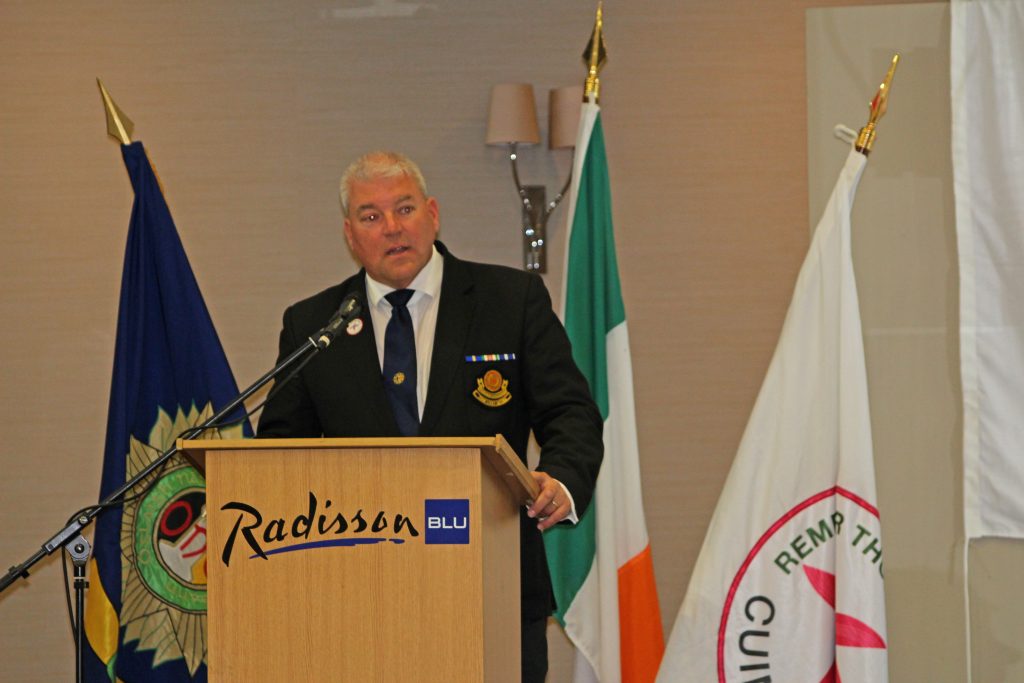 Derek Ryan BA, director of fundraising was next up, he started by thanking all delegates for their hard work in fundraising, “We wouldn’t be the organisation we are without you. It’s you that are out there out on the ground wearing our uniform and shaking buckets to raise much-needed funds for our colleagues.”

Derek explained that there were branches out there who were not supporting the Annual Fuchsia Appeal, which is the main fundraising appeal that supports their homeless initiative. “Parades are important, but they are ancillary to fundraising,” he said. “1/3 of fundraising was being spent on parades and commemorations. Some branches are cost neutral – if we were to look at an American model – we would look at closing branches!” 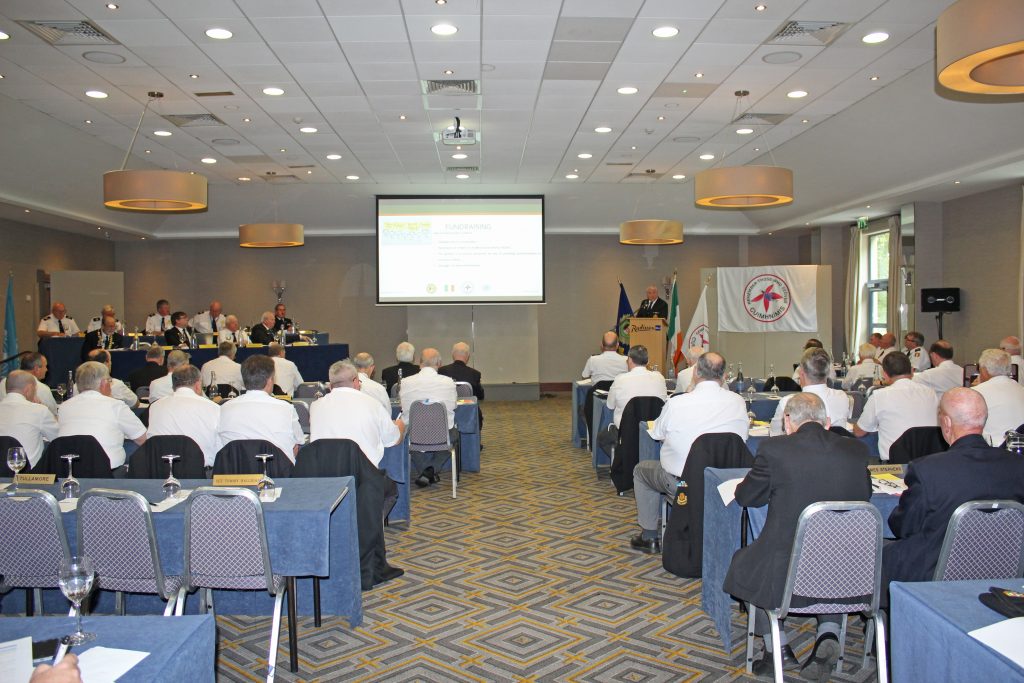 Derek thanked veterans associations and military groups for their continued fundraising initiatives like Swan Batt who hold the Veterans Black Tie Ball every year, and those behind the recent book launch About Face in Cathal Brugha Bks.

Derek stressed that the organisation needs new members urgently. “If every member brought in one new member we would increase our membership by 100% and not the 10% as stated in the strategic plan.” A bigger membership would give the ONE more leverage when advocation on behalf of veterans. Derek also encouraged females to join the organisation and said it would be great to see females on the board of ONE.

Derek suggested ways for branches to help spread the word of the Fuchsia symbol/badge like branches helping out in their communities by assisting other charitable organisations in fundraising who may, in turn, support the ONE when they are fundraising. If branched could look at holding a culture night with veteran’s photographic displays. The Fuchsia receive national coverage on the RTE’s Fair City program in the past year and at the Defence Forces Family Day in Farmleigh and at the National Ploughing Championships which had 35k and 100k visitors respectively. 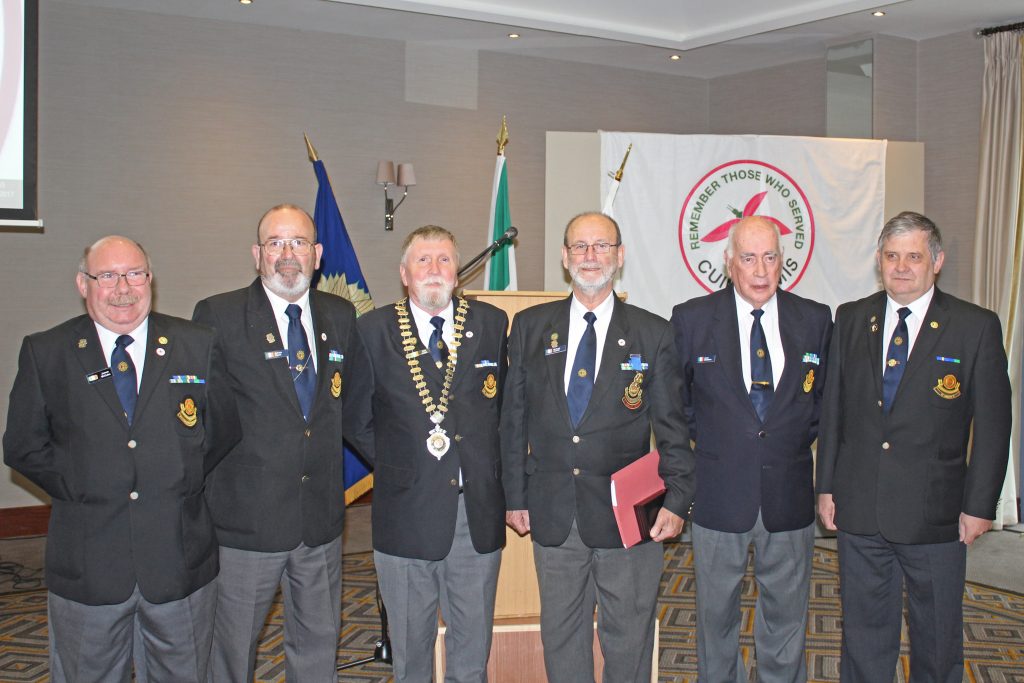 Derek finished by acknowledging the great work of Dick and Sinead from Brú na Bhfiann on the new ONE website. He thanked the marketing committee and said they were always available to branches should they need advice or assistance in fundraising.

During a Q&A at the end, it was suggested that paperwork, banners etc carried the Irish language version of the ONE’s Fuchsia slogan: CUIMHNÍMIS REMEMBER THOSE WHO SERVED.

CEO Ollie O’Connor was back up to inform members on the new Veteran Support Centres (VSC) being rolled out in the next few months. It is hoped to have an additional eight VSC setup along with the current two in Drogheda and Limerick, in suitable locations around the country. Ollie announced that the soon to be retired Defence Forces Director of Personel Support Services (PSS), Lt Col Ollie Barbour would be coming onto the board of ONE to help with veterans affairs in these VSC. 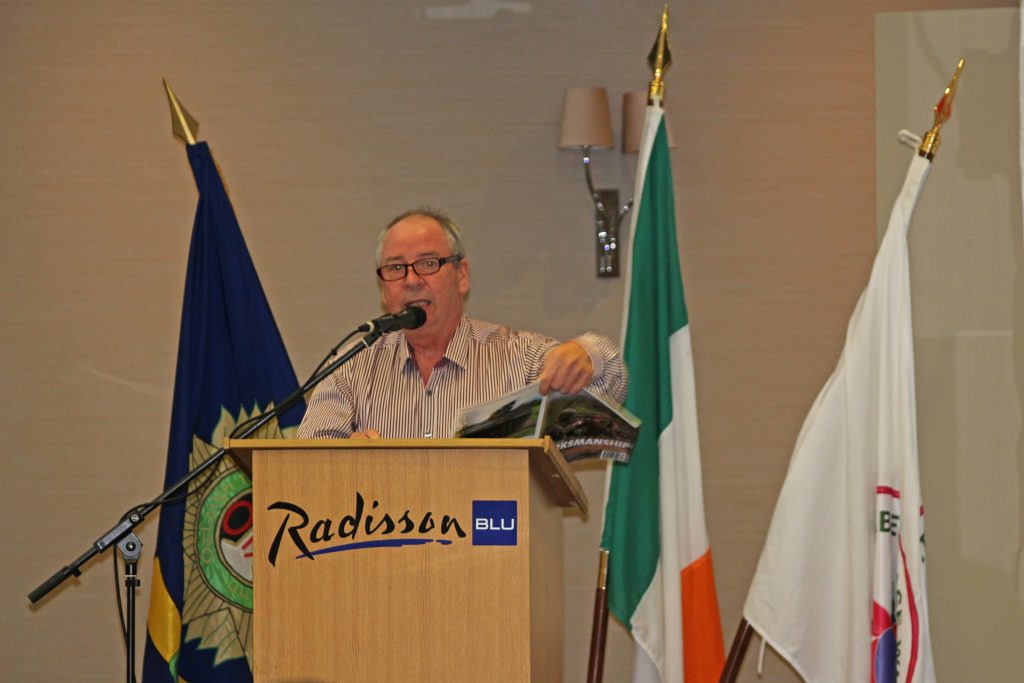 The guest speaker was Tony Stafford, a recent resident of Brú na Bhfiann, who had given an interview to An Cosantóir and filmed for the video launch of the 2017 Annual Fuchsia Appeal.

Tony came from a large military family, with over a 100-years-service between his two brothers and two nephews. Tony said he was delighted to hear the PSS being spoken so highly of, and of Veteran Support Centres.

Tony went on to tell the members of ONE about how he came to live in their homeless initiative Brú na Bhfiann. When his marriage ended and he was driving the streets of Dublin he passed by Brú na Bhfiann and pulled in and parked and broke down he was crying very hard for a man to admit. He had been to the home many times in the course of his work with the HSE, by introducing homeless veterans to the staff. “We all wore the flak jackets, and big boys don’t cry,” he said when it comes to asking for help.

Inside Brú na Bhfiann he said hello I need a room – to which he heard, “whose it for Tony?” from the house manager Dick Dillon. Tony emotionally told Dick it was for himself. Tony waited for news from Dick and was overjoyed when he got the call to say Dick had sorted him a room. Tony had captured the room, as this was for many, the first time they had heard the emotional story form a current resident of one of the homes that they help fund year-in-year-out.

And to hear that he had sorted a mortgage and was moving to a new home just outside the city after only just 10 months in the home. Tony stressed, “it’s not a hostel, it’s a home!” And that every resident had a similar story to tell, some deal with addiction and depression as we all know in this climate “homelessness is a crisis!” Tony said its very important we fund these initiatives, as nobody knows serving or retired if they will need this support. “I owe your organisation my life, I thank you very much.” Tony received a standing ovation for having the moral courage to come and discuss his problems to a room full of his peers, who on hearing his story fully understand the plight of some of our former colleagues. 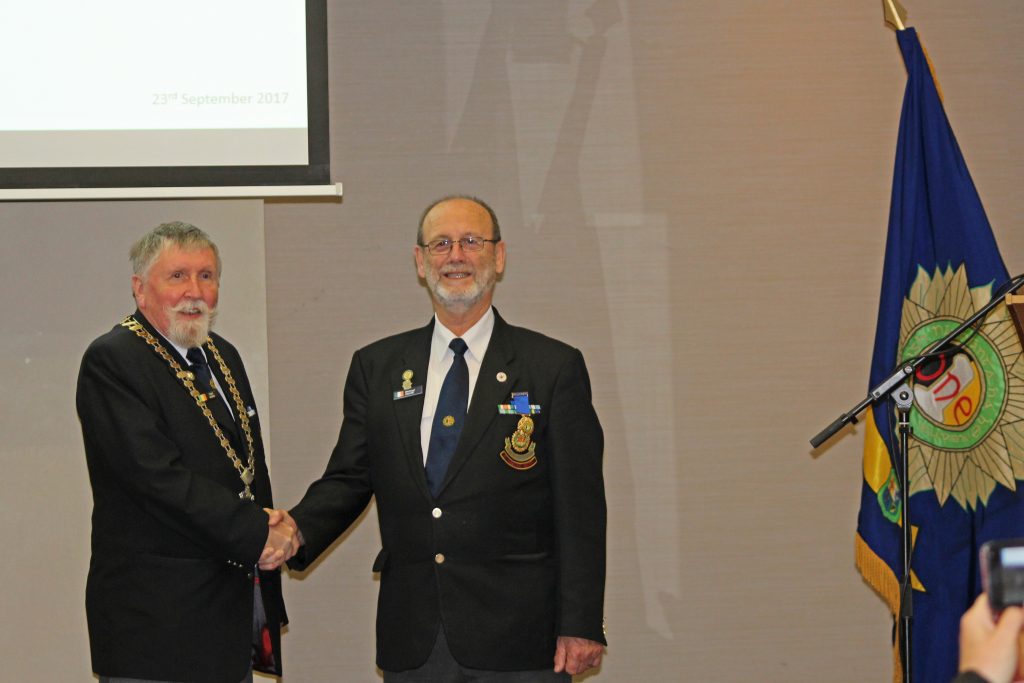 The conference finished with outgoing National President Michael Carroll handing over the chain of office to incoming president Tom James, who coincidently comes from the same branch in Newbridge.

Ollie O’Connor then thanked outgoing National Chairman, Paddy Rooney who has completed his term in office.

Full photo album of the conference below: